Truth be told, at times I find the scariest thing in the world is an empty computer screen! But for an author there can be something even more painful: the moment when you must “murder your darlings.”

This is a famous adage among writers, and it means that no matter how much you may love something you have written, if it doesn’t advance the story, it must be cut.

Since Halloween is the time to indulge in stories dark, moody, and dangerous, I thought you’d enjoy reading this “deleted scene” from the original manuscript of An Heiress at Heart, which takes place in the grim, gray dawn after a fatal duel.

The dense fog lay in an oppressive heap on the city, giving a tangible nature to every thought that was cold, bleak and dreary.
Lizzie shivered as she leaned against the ship’s railing, scanning the waterfront for any sign of her brother, willing him to stride out of the pre-dawn gloom with his familiar, confident step. But he was nowhere to be seen.
Lizzie had awoken a few hours earlier with a light heart, knowing she and Tom were leaving this very morning for Australia. She had expected to find him packing in the next room, but instead she had found only a note on the small, rough table. By daybreak, the note informed her, he would either be dead or an outlaw. If he did not meet her at the ship, she was to go on without him. Old Mr. Hurley would take good care of her, of that he was sure.
Lizzie had clutched Tom’s note, seized with shock and horror, until a knock on the door had roused her. She had run to it and flung it open, only to see the kind, weather-beaten face of Mr. Hurley, the man who’d arranged their passage and promised work for them in Sydney.
“Tell me where Tom has gone!” Lizzie had implored him. “He must be stopped!”
But Mr. Hurley had only shaken his grizzled head. “I’m sorry, Lizzie. Your brother did not tell me where the duel was to take place.”
“Why did you let him go!”
“He said it was a matter of honor. I’m nowt but a simple shopkeeper myself, but I understand that a man must keep his honor.”
Lizzie had made no effort to stem the tears streaming down her face. “I’ve already brought too much misery to my family. I could not bear it if I bring about Tom’s–” She had pulled up short, unable to say the word or even think it.
Mr. Hurley had put a kindly arm around her. “Don’t you worry, Lizzie,” he said gruffly. “Tom’s an able fellow. You mark my words: by this time tomorr 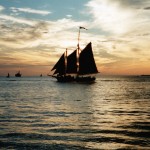 ow we’ll all be on the open sea for Australia, headed for better times.”
Lizzie had done all she could to focus on getting to the ship. As she loaded their few meager possessions onto a dog cart hired by Mr. Hurley, she had resolutely placed Tom’s duffel bag on top, telling herself the old man was right. Tom would be there. Of any other outcome she could not dare to think.
That Tom might succeed in his quest was equally horrifying. Memories of the heady days of passion Lizzie had shared with Freddie Hightower were lodged in her heart, perversely contradicting her bitter loathing for what he had ultimately done. Freddie had taken her to the Continent, promising to make her a lady, only to abandon her in Vienna with little more than the clothes on her back. Tom had found her and brought her home, but he could not leave it at that. No, he would find the man who had ruined his sister and avenge her honor–or die in the effort.
Lizzie pulled her shawl around her with trembling hands. Despite Freddie’s gross misdeeds, she could not bring herself to wish for his death. Although she had precious little right to read Scripture, much less quote it, she knew it said something about vengeance being for the Lord to mete out, not man.
Gray streaks of dawn pierced the morning mist. The docks began to fill with movement and sound. Shouts of shipmen loading cargo blended with families calling farewells and crying out for children who had gotten lost in the growing commotion. Lizzie did her best to stay out of the fray, standing at the ship’s railing and gazing out at London for the last time. She managed to keep her apprehension at bay by stoking her anger. She had every intention of giving Tom the brunt of her wrath when he returned.
If he returned.
She hugged herself tightly.
“There he is!” Mr. Hurley shouted. “Didn’t I say he would come?”
Lizzie saw him now. His tall form stood out on the crowded pier, but he was not moving with his customary vigor. He walked with a definite limp, leaning heavily on a stick, his free hand clutching his side.
Lizzie and Mr. Hurley raced down the gangplank and pushed their way through the crowd. Lizzie threw her arms around her brother. “Tom, how could you? You might have allowed Freddie to destroy the one good thing I had left!”
“Don

’t fret, dearest. All is well.” Tom spoke gently as Lizzie pressed her face into his rough woolen coat, but he made no effort to return her embrace. He stood stiffly, one hand inside his coat, the other tightly gripping the stick.
“Easy, Lizzie,” said Mr. Hurley. “There will be time enough later for scolding. We must get this lad to a cot. He’s bleeding.”
“Bleeding!” Lizzie stepped back and tried to push away the coat covering Tom’s hand.
“Tis but a scratch. The bullet grazed my side, that’s all.” Tom gave her a look of grim triumph that filled her with dread. “Freddie Hightower will never again hurt you.”

GIVEAWAY! So tell me, do you watch the “deleted scenes” on DVDs? If so, have you ever seen a scene that you wish they had left in the movie? Weigh in below in the comments! (Or simply say hi and let me know if you’ve enjoyed this deleted scene from An Heiress at Heart.) I’ll be giving away a copy of A Bride for the Season to one lucky commenter.*

And be sure to check out these other authors on the “Spooktacular Blog Hop”! They’ve got more spooky book excerpts and fun prizes to share!

SPOOKTACULAR BLOG HOP:
Heather Webb: a signed copy of Becoming Josephine  OR an arc of Rodin’s Lover and a holiday pack of chocolate goodies
Lisa Alber: a copy of Kilmoon and a wee Irish gifty
Anna Lee Huber: the audiobooks for Lady Darby Books 1-3
Alexandra Hughes: an audiobook OR an early copy of Vacant
Kerry Schafer: a signed copy of Wakeworld
Stacey Lee: an ARC of Under a Painted Sky
Janet Butler Taylor:  $15 Amazon gift card and some chocolate goodies
Hazel Gaynor:  a signed ARC of A Memory Of Violets and a signed book jacket of The Girl Who Came Home

*Giveaway ends on November 2, 2014 at 11:59pm EDT.  Prize mailed only to North American addresses. Entrants must be 18 years old or older to win.

I am happy to report that A Lady Most Lovely has won the 2014 Maggie Award for Excellence!

The winners were announced last weekend at the Georgia Romance Writers annual Moonlight and Magnolias conference. 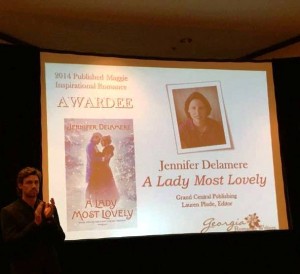 It was truly an honor to receive this lovely medallion and wear it home. I’m so thrilled and blessed by the warm reception this book has received. 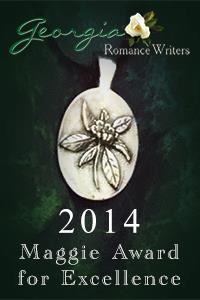 A reader pointed out to me that in A Lady Most Lovely, Tom gives Margaret the nickname of Maggie. A happy coincidence indeed!

Be sure to visit my Facebook page for more photos of the conference!

Great Review for A Bride for the Season! 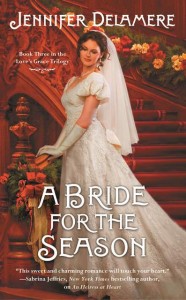 lishers Weekly review for A BRIDE FOR THE SEASON is out!

Here’s an excerpt from their review:

“The scintillating Love’s Grace trilogy conclusion (after A Lady Most Lovely) unearths the true character of one of the most roguish men in 1853 London…. The romantic dance between James and Lucinda sparkles with wit, intellect, and subtle desire in defiance of societal expectations.”

I’m so excited–can’t wait to share this book with readers!!!