I recently completed the final edits for Holding the Line, with the usual mixed emotions.  It’s tough to be parting from these characters for the last time, but I’m excited because I’m one step closer to sharing this book with readers! Many readers have told me they are excited for Rose’s story. As with the other books in this series, telegraphy will play an important role. There is also a certain book called The Spinster’s Guide to Love and Romance, which has been entrusted (unwillingly on her part) to Rose’s possession. 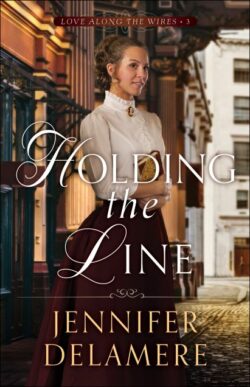 Here’s what it’s about…

A widow at just 30 years of age, Rose Finlay is determined to put all ideas of marriage and family behind her and pursue an independent life. But when she notices a young woman about to be led astray by a roguish aristocrat, bitter memories from her past arise, and she feels compelled to intervene. The unintended consequences of her efforts will ultimately force Rose to reexamine her life in a new light.

As the overseer of his two widowed sisters’ financial and domestic affairs, John Milburn carries heavy responsibilities for a single man. But he’s faced with his biggest challenge when his headstrong niece falls prey to the attentions of a powerful man who could ruin both her and her family.

When Rose and John join forces to protect his niece, they put everything they hold dear—including their growing attraction—in jeopardy.

I love this story because…

I think if anyone deserves a happy ever after, it’s the stalwart, kind, honest, and resourceful Rose. Although Rose is genuinely happy that her dear friends have made good marriages, she has no dreams of romance for herself. But she finds a kindred soul in John Milburn. They bond over many things, including a love of books and, ironically, a desire to remain single due to troubles past and present. It was very satisfying to see their story unfold.

The book will be released on December 6, 2022, but you can preorder now at BakerBookHouse.com for 40% off and free shipping!