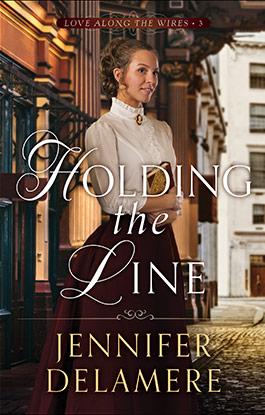 A widow at just 30 years of age, Rose Finlay is determined to put all ideas of marriage and family behind her and pursue an independent life. But when she notices a young woman about to be led astray by a roguish aristocrat, bitter memories from her past arise, and she feels compelled to intervene. The unintended consequences of her efforts will ultimately force Rose to reexamine her life in a new light.

As the overseer of his two widowed sisters’ financial and domestic affairs, John Milburn carries heavy responsibilities for a single man. But he’s faced with his biggest challenge when his headstrong niece falls prey to the attentions of a powerful man who could ruin both her and her family.

When Rose and John join forces to protect his niece, they put everything they hold dear—including their growing attraction—in jeopardy.

Rose was about to leave the front counter to return to her other duties when she noticed John Milburn entering the post office. It was surprising, so why did it also feel somehow inevitable? Perhaps because John had frequently come to Rose’s thoughts over the past few days. The information she’d learned from Douglas Shaw had piqued her interest in him. What must it be like to give up one’s own occupation for the sake of one’s family? What had been his occupation before, and did he regret having to make the change? Rose had tried to mentally shrug off those questions, figuring she probably wasn’t going to see him again. Yet here he was.

She battled mixed emotions as he strode up to the counter. If he wanted more information regarding Sophie or Mr. Deveaux, he was going to be disappointed. She had none, and she wouldn’t have shared it if she had. But why else would he have come?

He gave her a cheery smile. “Good afternoon, Mrs. Finlay. I hope you are well.”

“Yes, thank you. What brings you here today?” She made a movement toward the second till, as though she thought he was here for a postal transaction.

His shook his head. “To be honest, I was hoping to have another chat with you—if it’s convenient.”

Rose wasn’t sure she liked the sound of that. “What about?” she countered.

He pulled a book from a satchel and placed it on the counter. Its title was clearly embossed on the cover: The Pickwick Papers. “We talked about Dickens the last time we met. You mentioned that you might be interested in trying this again, so I brought it along, just in case you didn’t have a copy.”

In fact, Rose did not own a copy. She had a subscription to a circulating library, which provided most of her reading materials. That was a lot cheaper than buying books, especially given how many she devoured in a year.

He pushed it toward her. “It’s just a loan, but you may keep it as long as you like. I thought it might be fun for us to discuss it sometime.”

This obvious kindness only heightened her wariness. She’d learned long ago to be careful about taking any gestures from men at face value. “Thank you, but I don’t think I could accept this.”

“It’s just a loan,” he repeated. “I’d be pleased if you accepted. And I’d be honored if you’d allow me to buy you a cup of tea. There’s an upcoming lecture on Dickens. I’d like to tell you more about it. Perhaps you’d be interested in going.”

He seemed to be genuinely going out of his way for her. Even so, Rose could not let go of her concerns. What she’d seen of John Milburn, and heard about him from Douglas, had been good. Yet given the situation with his niece, Rose could not ignore the fact that he might still have ulterior motives. He could be seeking more help or information.

“My offer is coming strictly from a place of friendship,” John said, almost as though he was reading her thoughts. “Do you think men and women can be friends?”

Rose couldn’t help but feel an odd sense of unreality. Was this man merely trying to befriend her—and with a book? It was such a marvelous idea that she couldn’t quite bring herself to believe it. She’d always been comfortable working around men, but never had one tried to strike up a friendship with her. Certainly, no man had ever wanted to make her acquaintance simply to discuss books. They usually had very different things on their minds. “You honestly just want to talk about Dickens?”

He lifted his hands. “I promise I will not broach any other subjects. Certainly nothing about my family, if that’s what’s concerning you.”

Rose sent a glance toward Miss Palmer and Stan Reese. Each had dutifully begun their end-of-day tasks, but it was clear they were also watching Rose and John’s interaction with some interest. Perhaps this was because Rose allowed no part of her private life to blend with her work. Nor was she about to begin today. It was going to be easier to relent, if only to bring this conversation to a close more quickly. “I do have a bit of time this evening, as it happens. It will take me a few minutes to close up here. If you want to wait at the tea shop, I’ll be along presently.”

“Thank you.” He straightened and stepped back from the counter, but took the book back in his hands. “I’ll keep this for you until then. It will give me something interesting to read to pass the time.”

The way he said this, and the jaunt in his step as he left, made Rose want to call out to him and cancel the whole thing. But he was out of the shop before she could make up her mind to do it.